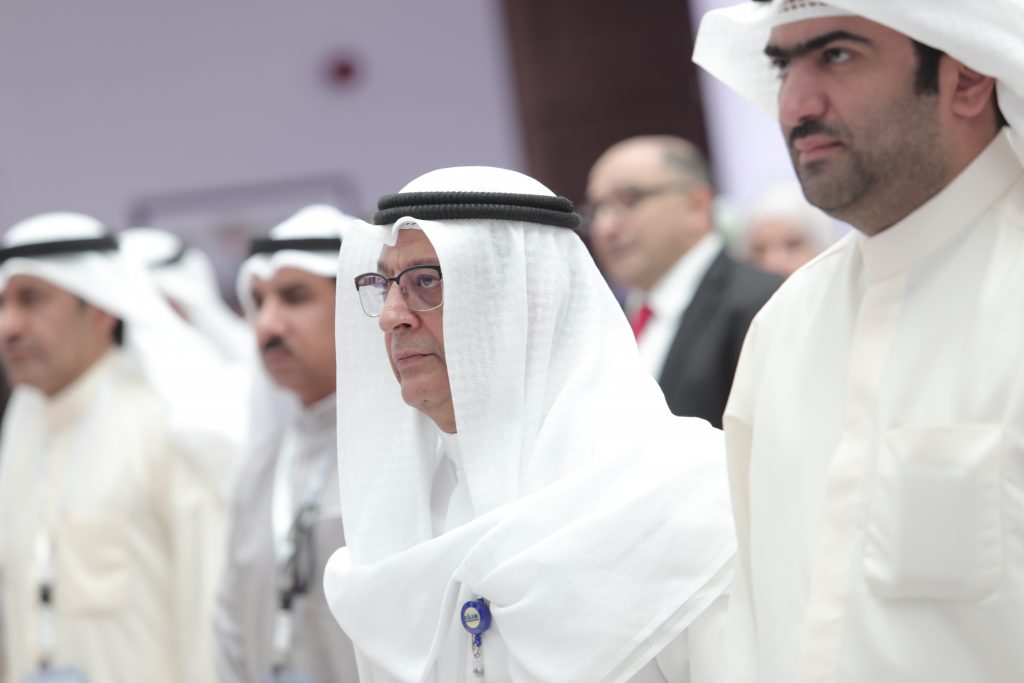 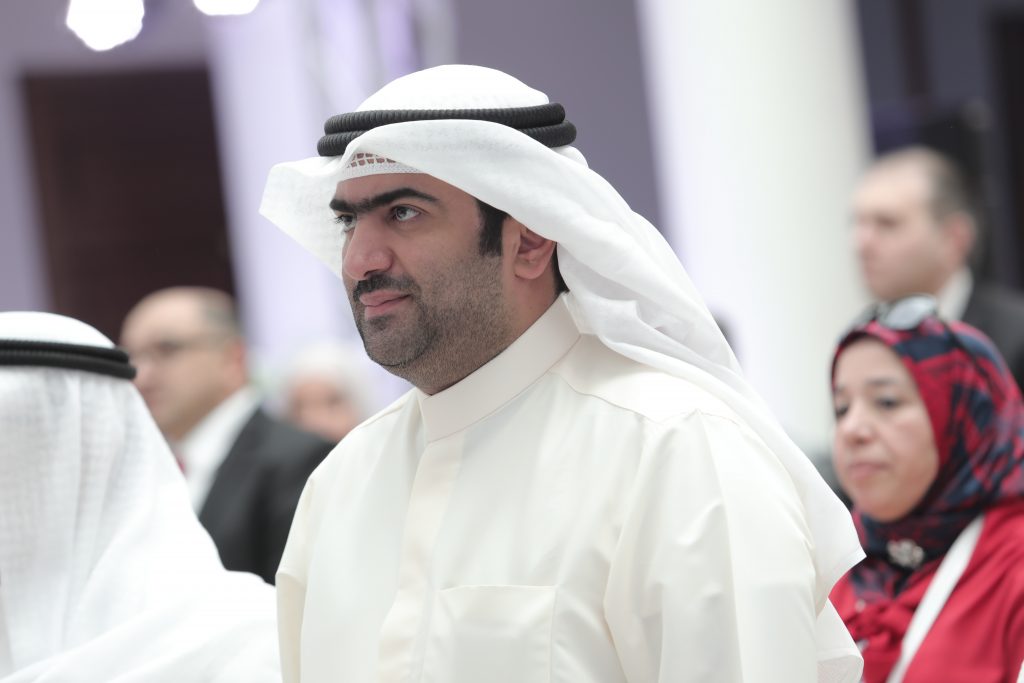 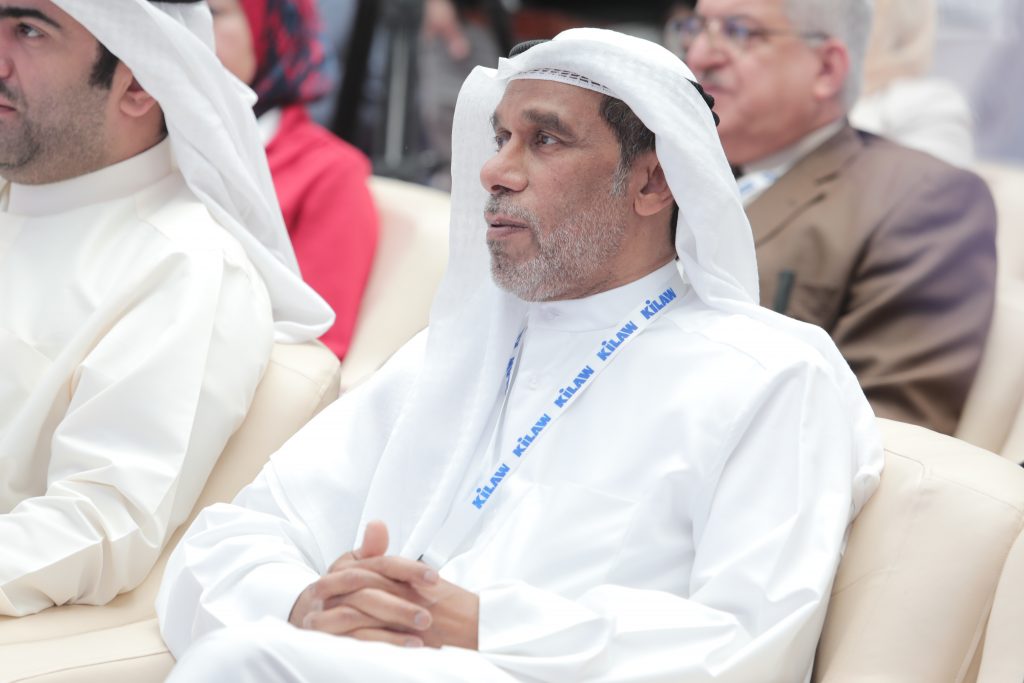 The opening ceremony the 4th Arab Moot Court Competition has been held on Sunday, April 2, 2017. The competition is organized by Kuwait International Law School. It was held in the period from 2 to 5 April 2017 at KILAW’s campus, with the participation of the following teams:

2. The University of Jordan

The ceremony began with a welcome speech from the Director of Student Development and Competition Department, Ms. Hanaa Al-Ibrahim, in which she thanked all those who participated in sponsoring this competition and expressed her happiness with the participation of a number of students from different Arab countries. In addition to their desire to compete and win this competition, these students have arrived to Kuwait in order to exchange experiences and benefit from the legal information provided by their colleagues, each in his/her field of specialization.

Then the patron of the ceremony, Mr. Khalid Al-Rawdan, Minister of Commerce and Industry and Acting Minister of Youth, delivered a speech in which he expressed his happiness with the establishment of such competitions, which, despite being overwhelmed with competitiveness, it is a golden opportunity for this generation to mingle with their peers and create friendships that would go beyond the boundaries of dialects and countries.

Following him was KILAW’s Dean, Prof. Mohammed Al-Moqatei, who delivered a speech in which he expressed his pride in the various

accomplishments of KILAW despite its young age. The School has graduated 500 LL.B students and 45 LL.M students, armed with the necessary academic tools which allow them to compete with their peers for jobs and legal professions. The Dean also thanked the sponsors of the competition and all those who have contributed in the success of this competition which is a testament to the superiority of the Arab universities with all their students in the field of legal sciences.

This was followed by a short break to give the participating teams the opportunity to get acquainted and initiate quick conversations with each other, which had the effect of closing the distance between the teams and spreading the spirit of friendship among them..

Dr. Faisal Al-Kandari, Chairman of the Supreme Arbitration Committee, explained some of the competition’s rules, received inquiries from the teams and answered them in order to remove any ambiguity or confusion. This was followed by a draw which determined which teams would meet in the preliminary rounds and then each team was asked to exchange their memorandums with the other team. After lunch, the teams set off returning to the hotel to prepare for a fierce competition the following day.

On Monday morning, the sessions started from 9:00 am till 3:00 pm, where teams had the opportunity to exchange roles between a “Prosecutor” and a “Defendant” when facing their competitors. The teams were then given a break to rest and have lunch while the members of the Supreme Committee of Arbitrators deliberated on the results of the competing teams.

After the break, the teams were gathered for the announcement of the results. Dr. Faisal Al-Kandari reminded the participants that it is the nature of such competitions to have winners and losers. He pointed out that losers are not necessarily a careless or a bad student, as everyone who has participated in this competition so far has made every effort to reach this place and benefit from this event.

When the results were announced, everyone expressed their admiration of the ability and strength of the winning teams, which are:

The judges and the coaches have also expressed their admiration of the teams’ excellent performance and efforts to reach this stage. A second draw was made to determine the competing teams in the quarter-finals. Teams were asked to exchange their memorandums before returning to the hotel in order to prepare for a tougher competition the following day.

On Tuesday morning, the quarter-finals took place at 9:00 p.m., followed by a break, and then the results were announced, revealing the names of the four teams qualified for the semi-finals, which are:

The audience expressed their admiration of the continued impressive performance of the teams and their eagerness for a tougher competition in the semi-finals.

By the end of Tuesday and the end of the semi-finals, the competing teams were eagerly awaiting the announcement of the results. The identity of the winning teams were revealed to announce that the Cadi Ayyad University and Birzeit University will be competing for the title in the final round of the Arab Moot Court Competition 2017. With the announcement of the results, the applause rose, even by the other competing teams, in the happiness and delight to witness the excellent performance of the qualified teams. This was a clear evidence of the spirit of brotherhood and friendship that overshadowed the spirit of competition between brothers and sisters from one Arab nation.

On Wednesday morning, April 5, 2017, the final round of the 4th Arab Moot Court Competition was held in Kuwait between Cadi Ayyad University and Birzeit University, who have arrived armed with the determination

persistence to win. They saluted each other and wished each other success. The Court was formed by Dr. Mohammed Al-Hammadi as the Chief Justice, and the membership of Prof. Sami Rawashdeh and Dr. Nidal Yassin. The Prosecutor was represented by Hamza Sweid and Ola Omar (Birzeit University/Palestine), while the Defendant was represented by Abdul Latif Baskar and Sana Harrar (Cadi Ayyad University/Morocco). The final session began at 10 a.m. and finished at around 12 p.m. The competition was intense between the two teams who were asked to answer the judges’ rigorous questions in order to prove that they deserve to be at this stage of the competition.

After concluding the session, all the participating teams were invited to lunch until the Court completes its assessment of both teams and sends the results to the Chairman of the Supreme Arbitration Committee. Dr. Faisal Al-Kandari called for the audience’s attention to announce the final results, saying: “All the Arab countries and countries of the Maghreb are dear to us, but Palestine remains the dearest,” announcing that the team of Birzeit University/Palestine has achieved the first place while the second place goes to Cadi Ayyad University/Morocco.

The closing ceremony was opened by a speech by Ms. Hanaa Al Ibrahim, Director of Student Development and Competitions Department, in which she announced the end of the competition which has witnessed the Arab spirit and a fair, healthy competition among the students who made great efforts to show their potentials and abilities while at the same time maintaining the spirit of fellowship and brotherhood among them. “We, here at Kuwait International Law School, are proud to have organized this competition with a noble goal that goes beyond giving titles, as there is no winner or loser, but we are all here to witness an Arab educational phenomena of shared experiences and friendship,” she said, “we would like to thank our colleagues and all those who have contributed to the success of this outstanding experience, as they did not spare their efforts to provide all the comfort to our guests.”

Then, Prof. Mohammed Al-Moqatei, KILAW’s Dean, thanked all those who have contributed to the achievement of this Arab educational event. The School has witnessed a fair competition between students who have come to Kuwait not only to compete but for the purpose of getting acquainted andcommunicate with their peers and the Arab youth. He thanked the Chairman and members of the Supreme Arbitration Committee, the judges, the coaches, and the Student Development and Competitions department in KILAW as well as the organizing committee for their efforts in preparing for this event and following up all the details to provide a friendly and meaningful experience for all the participants. Prof. Mohammed Al Moqatei concluded his speech by expressing his School’s readiness to be a center for the Arab Moot Court Competition and to establish an information center and an archive of the competition since its inception four years ago, and to be a reference for all those wishing to organize and host the competition in the future.

This was followed by playing a video that has been filmed during the days of the competition at Kuwait International Law School. Prof. Mohammed Al-Moqatei, in addition to the members of the judges, handed certificates of appreciation over to all the participants for their participation in the 4th Arab Moot Court Competition.

Then, Prof. Mohammed Al-Moqatei and Dr. Faisal Al-Kandari presented the prizes to the students. Sultan Qaboos University won The Best Written Memorandum Award. The winner of The Best Pleading Award For the Preliminary Rounds was Noor Ali from Kuwait International Law School (for 3 rounds) and Hamzeh Fathi Ahmed from Birzeit University/Palestine (for 2 rounds). Sana Harrar from Cadi Ayyad University/Morocco won The Best Pleading Award For The Final Round. Kuwait International Law School has won The Renewable Achievement Award with the highest mark in the preliminary rounds.

Prof. Mohammed Al-Moqatei did not forget to extend his thanks to the members of the Supreme Court of Arbitration, who have made undeniable efforts for four continuous days. He presented Shields of Appreciation to Dr. Faisal Al-Kandari, Dr. Nidal Al-Yassin, Dr. Mohammed Al-Hammadi, Prof. Sami Al-Rawashdeh, in addition to members of the Supreme Arbitration Committee: Dr. Mahmoud Maghrabi, Dr. Jamal Al-Eid, Dr. Nour Al-Abd Al-Razzaq, and Dr. Ali al-Zafairi.

At the end of the ceremony, The coach of Sultan Qaboos University/Oman, Prof. Rashid Bin Hamad Al Bloushi presented a commemorative plaque to

Prof. Mohammed Al-Moqatei on behalf of the University and praised the distinguished experience of Kuwait International Law School in Kuwait and the region, which he considered “the jewel of the crown of the Law Faculties in the Arab world,” and a pride and achievement at the academic level.

After exchanging greetings and congratulations, the participating teams returned to the hotel to prepare for the trip back home, leaving behind good memories which will always be caught in the minds of everyone who participated in the organization of this event, and an evidence of the achievements accomplished by everyone under the patronage of Kuwait International Law School.